The first step is to figure out whether or not I want the picture to be black and white, or color - in its final form. Usually, if I'm out and about shooting, and I notice a lot of color contrast, I'll lean towards making it black and white. Conversely, if the color is kinda flat (to the human eye), yet has an interesting set of textures, I'll lean towards the color final. Here's how, and why I do it.


Please note, this is a technique that I've been using for YEARS - and have been trying to refine it. This doesn't work for every application, nor should it be tried on every application, but in my standard workflow, it's at least a process I try out - even if I throw away all the work. I've used this on my Canon 5D MK1, 40D, 7D, and more recently Sony A7RII (and I'm still using my Canon glass, with the Sigma MC-11 adapter)

Let's look at an image I plan on turning black and white for the final: 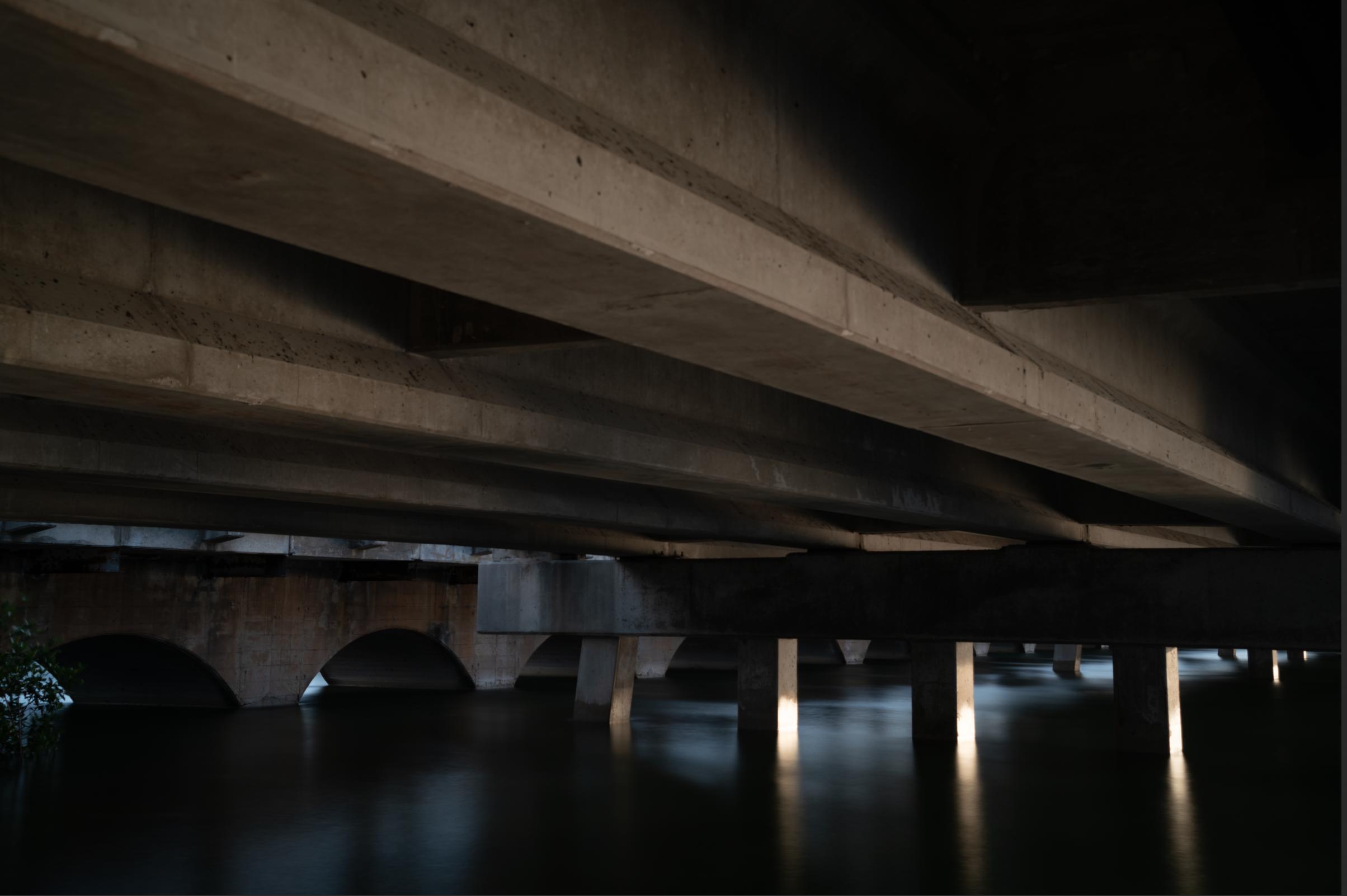 Straight out of Camera

The overall tone of the image is a warm grey, like any concrete would be at sunset. But, there's water - and that water is obviously going to have a *slightly* different color base than the bridge I was photographing. What I try to do is pull out that color contrast, by saturating the image as much as I can, without getting crazy noise burn, or "fake color" looking areas. See below. 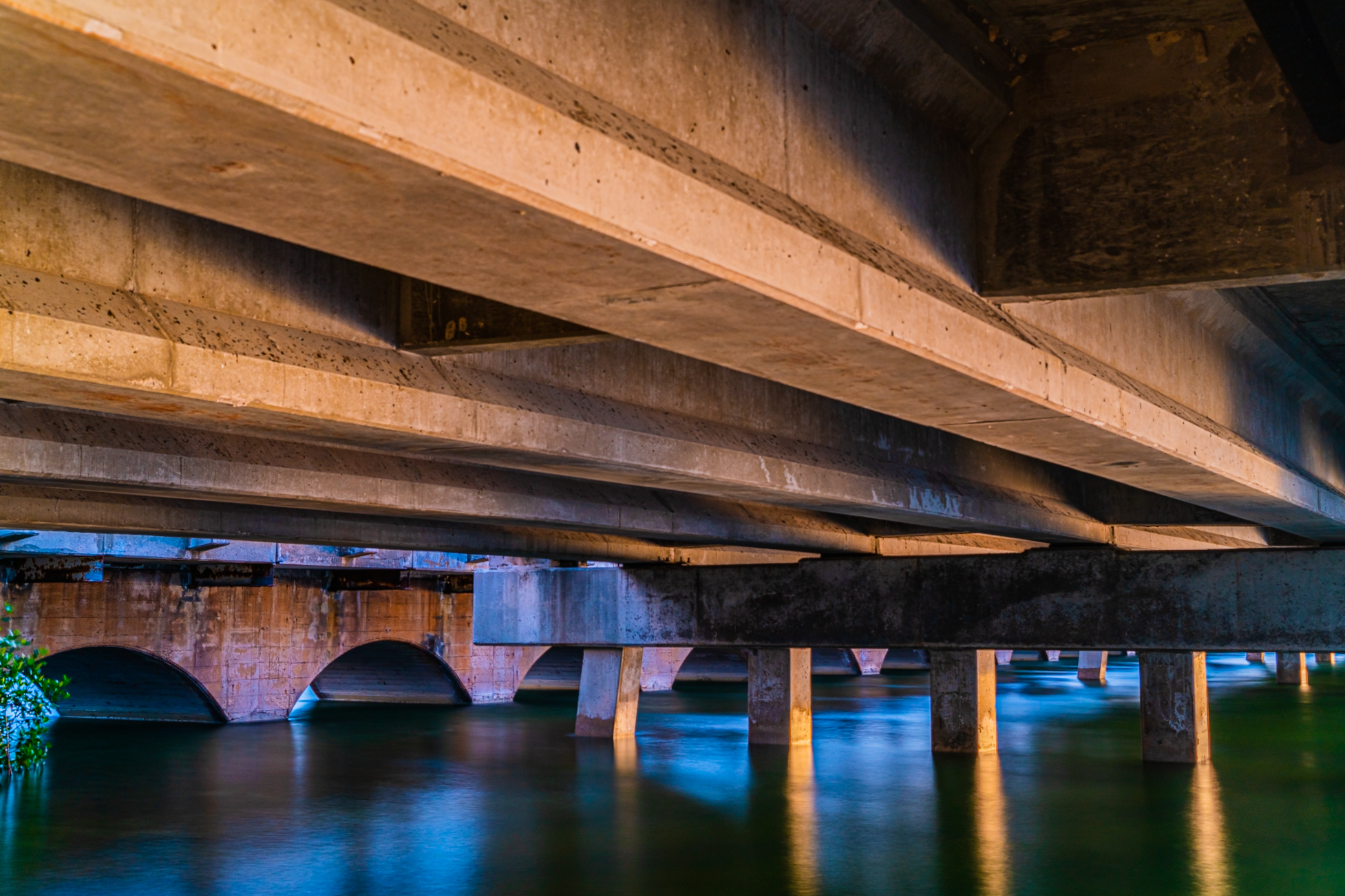 The idea behind putting all this saturation and vibrance in is to allow me the flexibility to choose which parts I want highlighted, or shadowed later - by using a green, or magenta, or blue filter (or a host of other options). This is the stage where I'd do my edits, such as removing telephone poles, dust spots, garbage, straightening, perspective, etc....
(Yes, I know, the color in the CameraRAW edited version is a bit punchy - but that's the point) 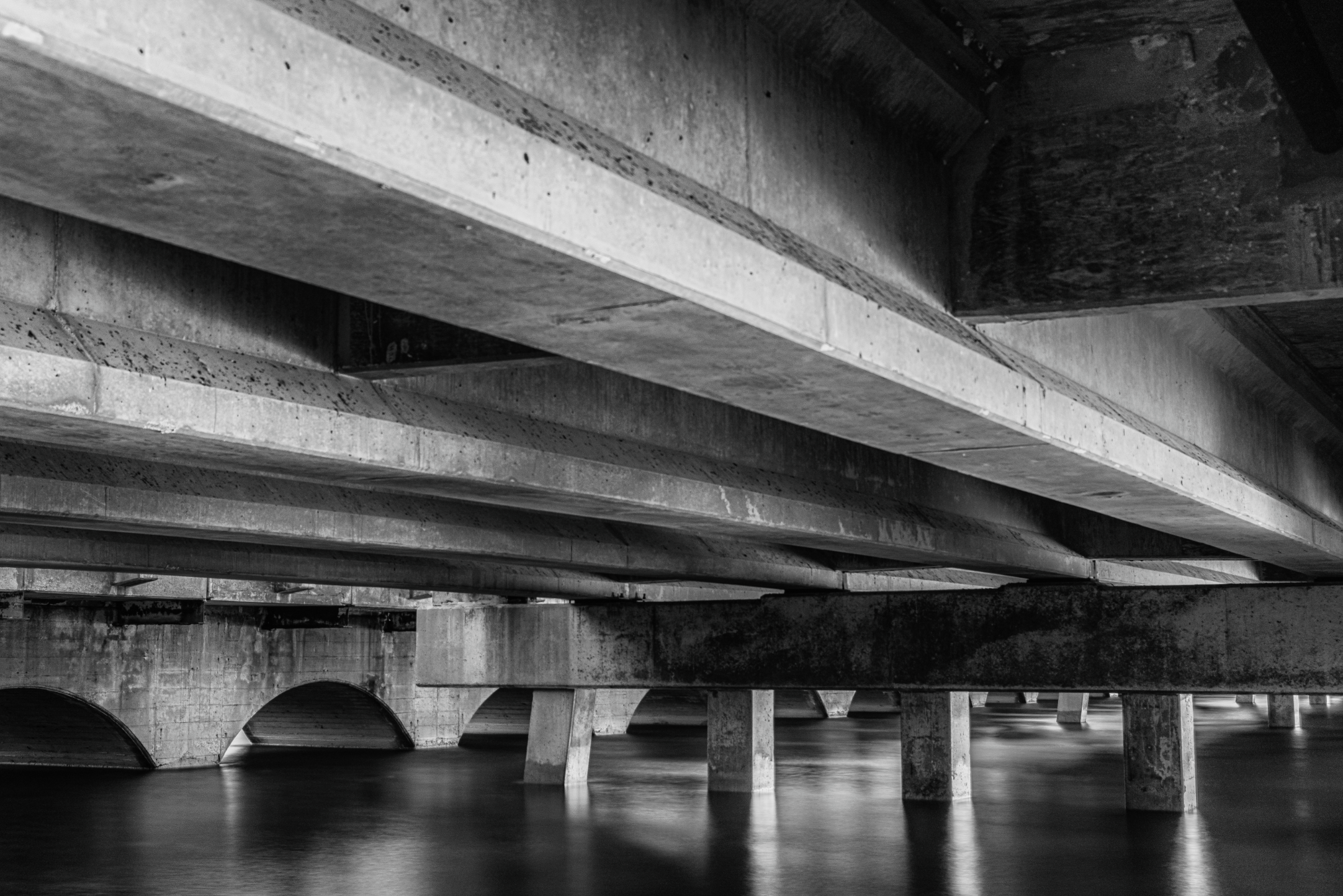 Nextly, comes the toning. I don't go as far as some of the great architecture guys go (Quite frankly, because I don't have the patience - which is the whole reason I picked up photography - much faster than painting with oil). Generally speaking I want to accentuate the part of the image that wouldn't normally be looked at. In this particular area, when you're under a bridge, a flat-grey concrete is boring. You have the motion of the water right in front of you, and that typically draws all the attention - especially at sunset when you see a nurse shark swimming past, or the pink of the sky reflects off certain parts of the water. No, I wanted to focus on the structure itself. So what you have to do, is look at the colors within that structure, and find which band provides the most color contrast. ﻿No, I don't mean light vs dark, I mean red vs blue. They could have the same luminosity value, but if the colors are different, then you can actually play with something. (This is why saturating beyond 'reality' beforehand is so important - it allows you to select which parts of the image you want to show off). I'm using Nik Silver Efex Pro - in my experience, the BEST B/W plugin for Photoshop. This particular filter is called "Full Dynamic Smooth." Moderate modification of the contrast, structure, brightness were used. Also sparingly used was the highlight, and shadow recovery sliders (also in SilverEfex, in the same window) 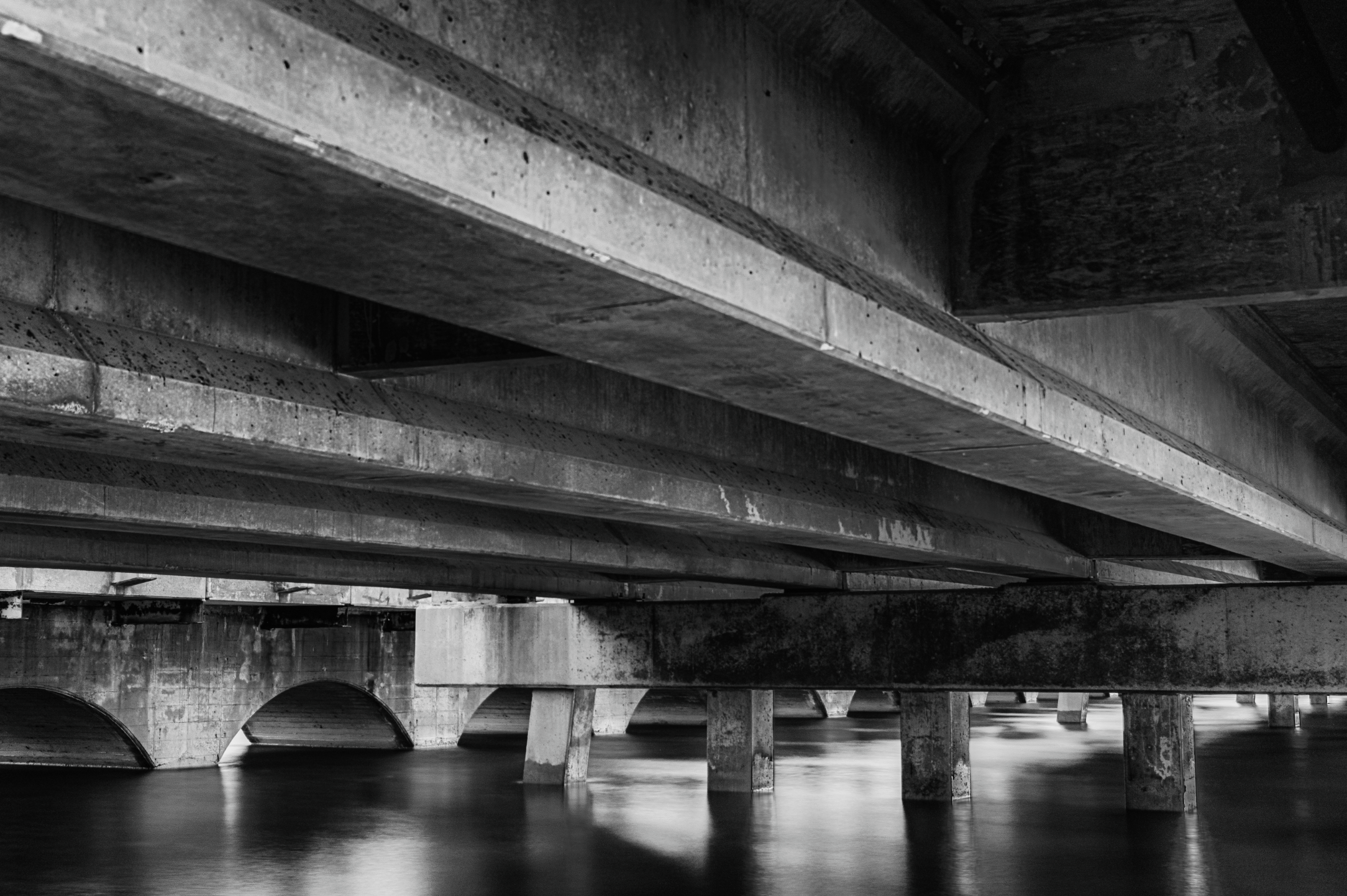 Blue Channel (Note the brighter water, just below the far cross support beam, closer to the right hand side) 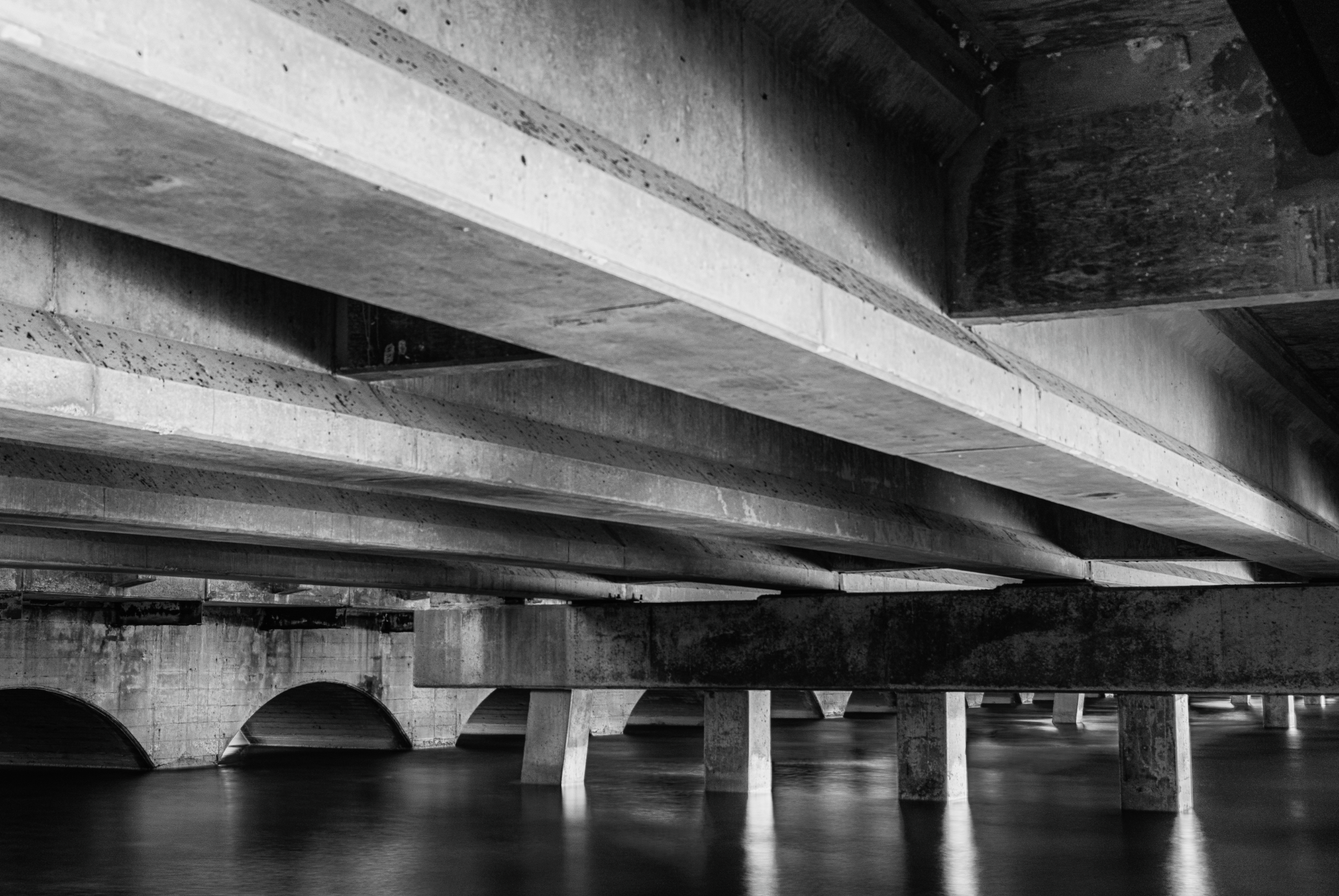 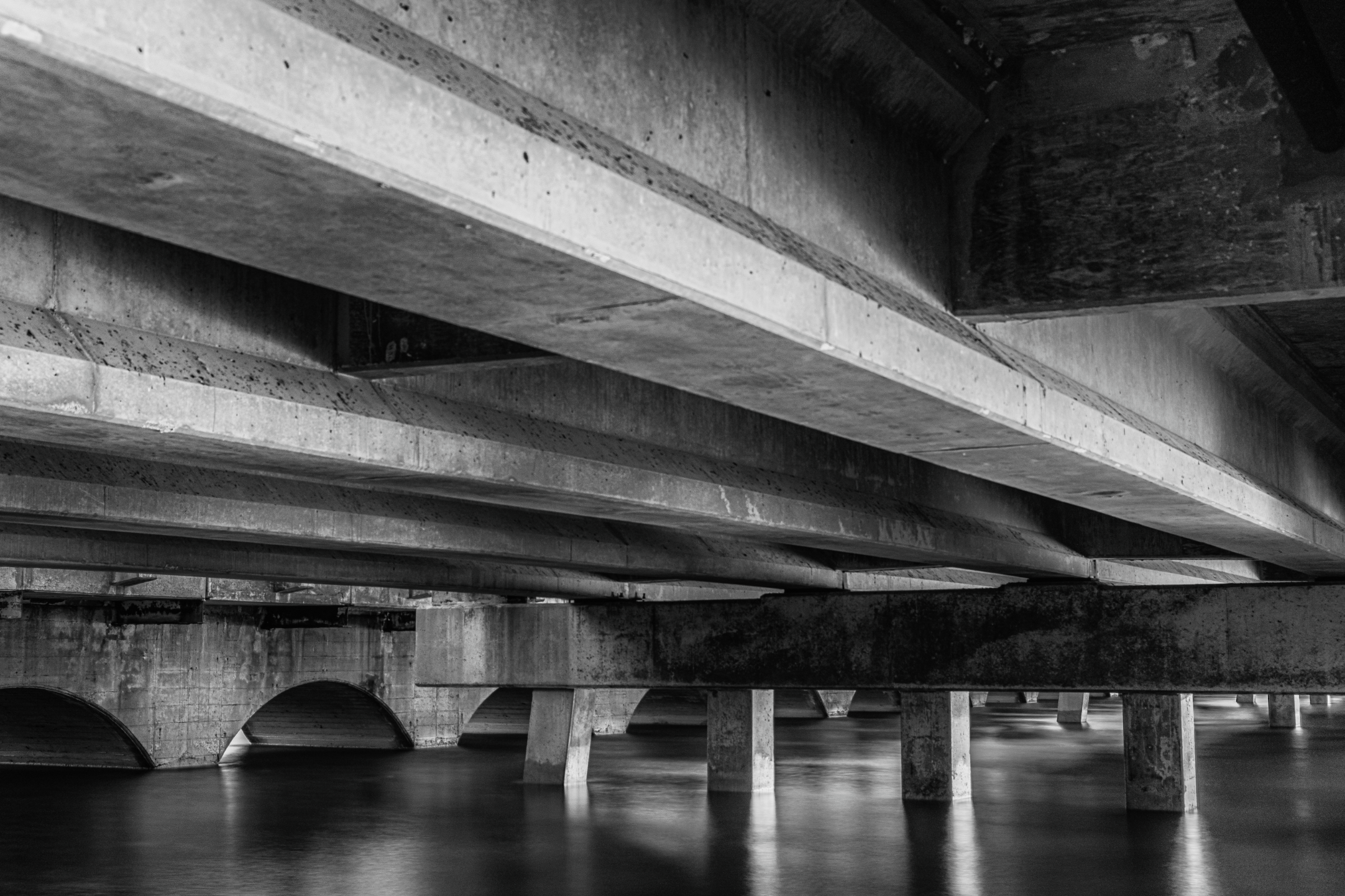 Green Channel (Note great detail coming out in the concrete, but lightness starting to come back into the water, and a less punchy feel)


After I select which channel I think brings out the most contrast in a particular image (sometimes, it's just an area of an image that I want to pull attention to, I further edit by putting graduated ND filters on it - usually I try to balance out the exposure, so the image seems more 'flat' - which is usually something you don't want, I know).

For this image, I opted for the blue channel. Filters out out the warmth in the concrete and brings in contrast, neutralizes the water below. Gratuitous use of the ND filters (called "Burn Edges" in this particular plugin) are used to draw the attention to the center of the image. Final is something like below: (I forget the exact settings, and SilverEfex doesn't allow you to go back and make these adjustments - dang!) 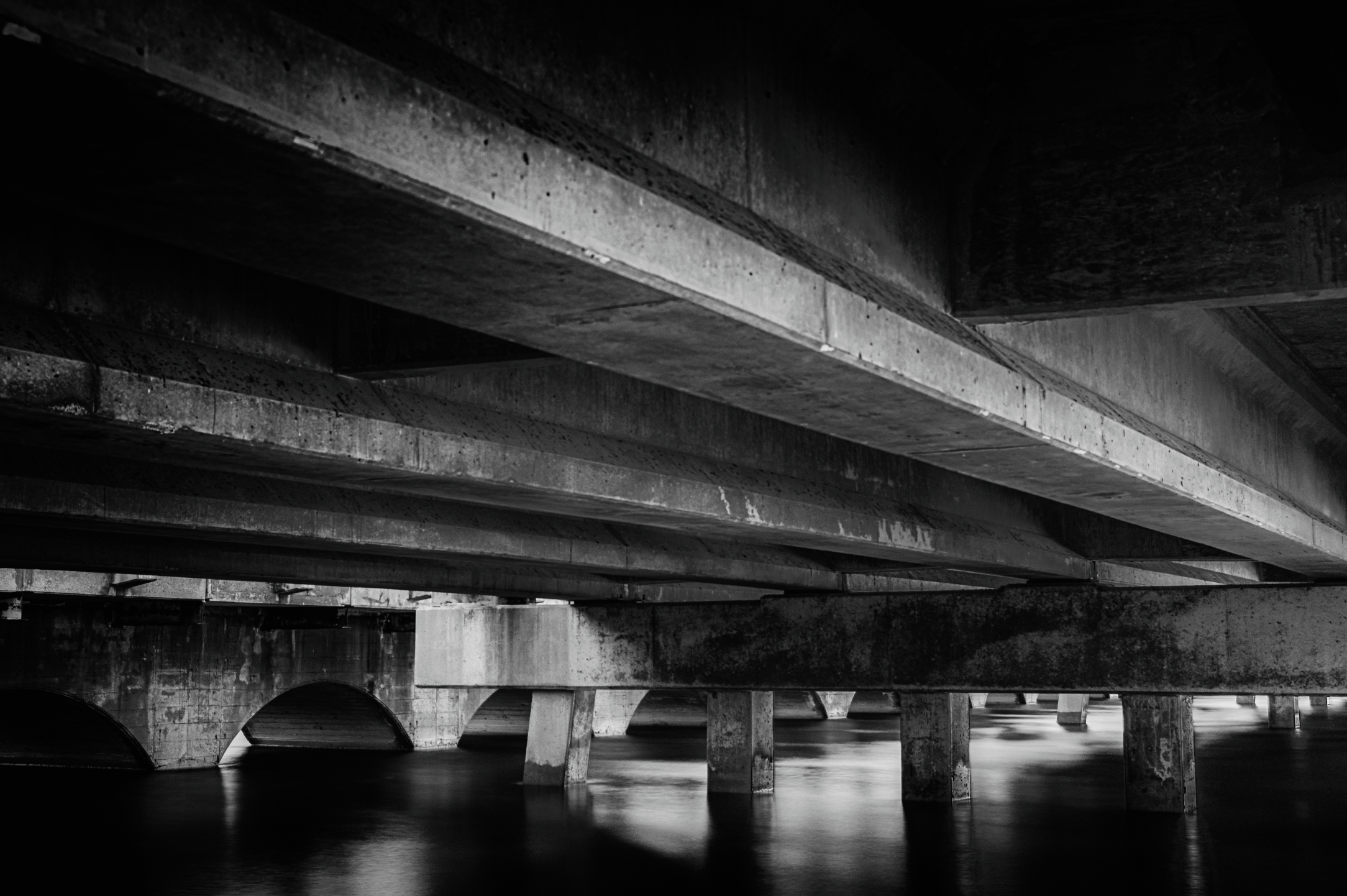 My theory behind the implementation of specific color tones regarding luminosity, is rooted in the same concept as above - training the eye to feel a greater punch, without simply adding a blanket contrast to an image. This includes training it to move to a certain part of the image, and training it to ignore other parts.

Next up is a classic Key West sunset. Wonderful, puffy clouds, plenty of color. A little BTS shot (from my iPhone) shows that it was (in fact) very vibrant - and the Sony, for whatever reason, doesn't like to show that color (I think it's because the shot is in RAW, so NEEDS to be processed to show any color liveliness). 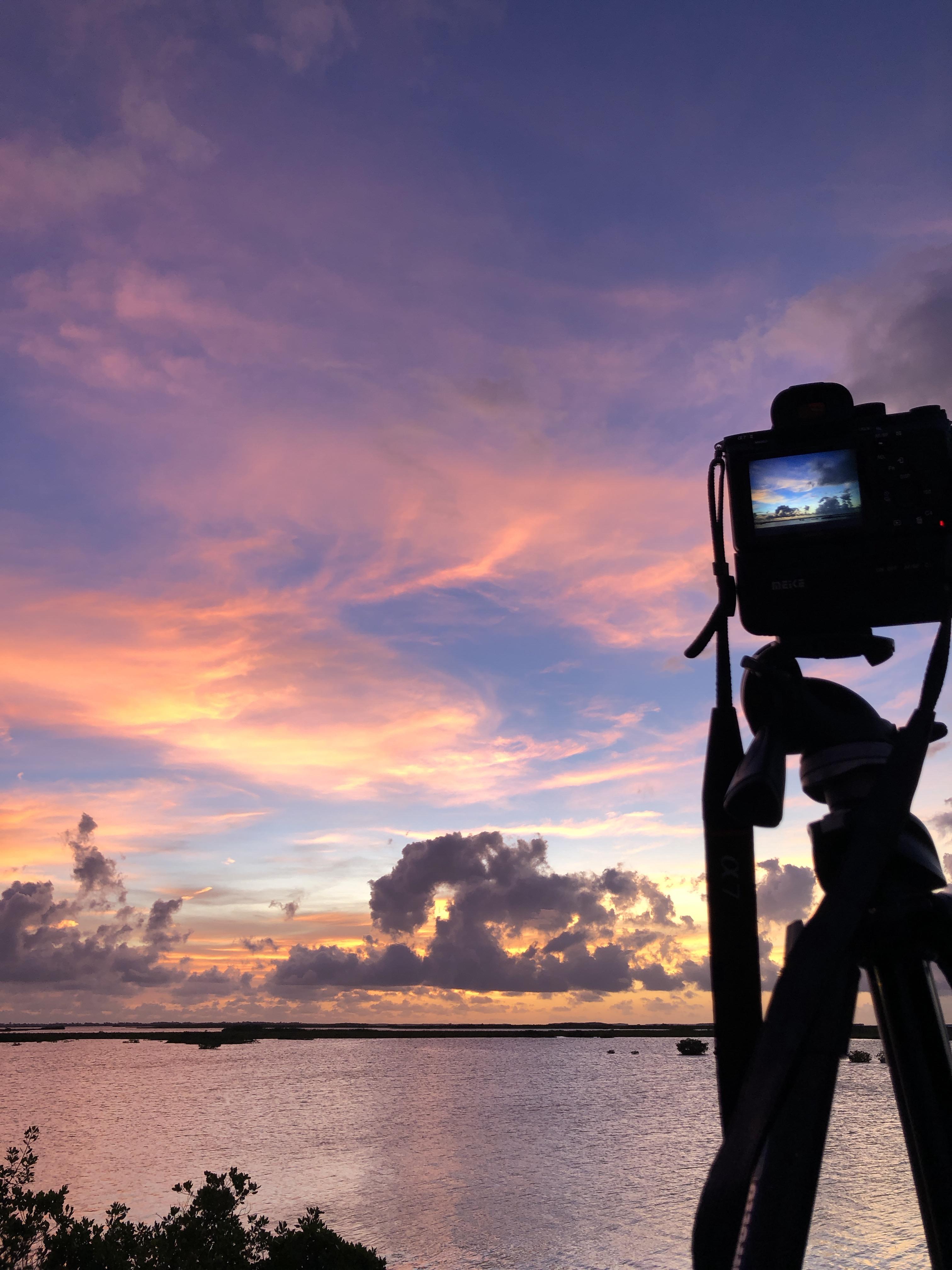 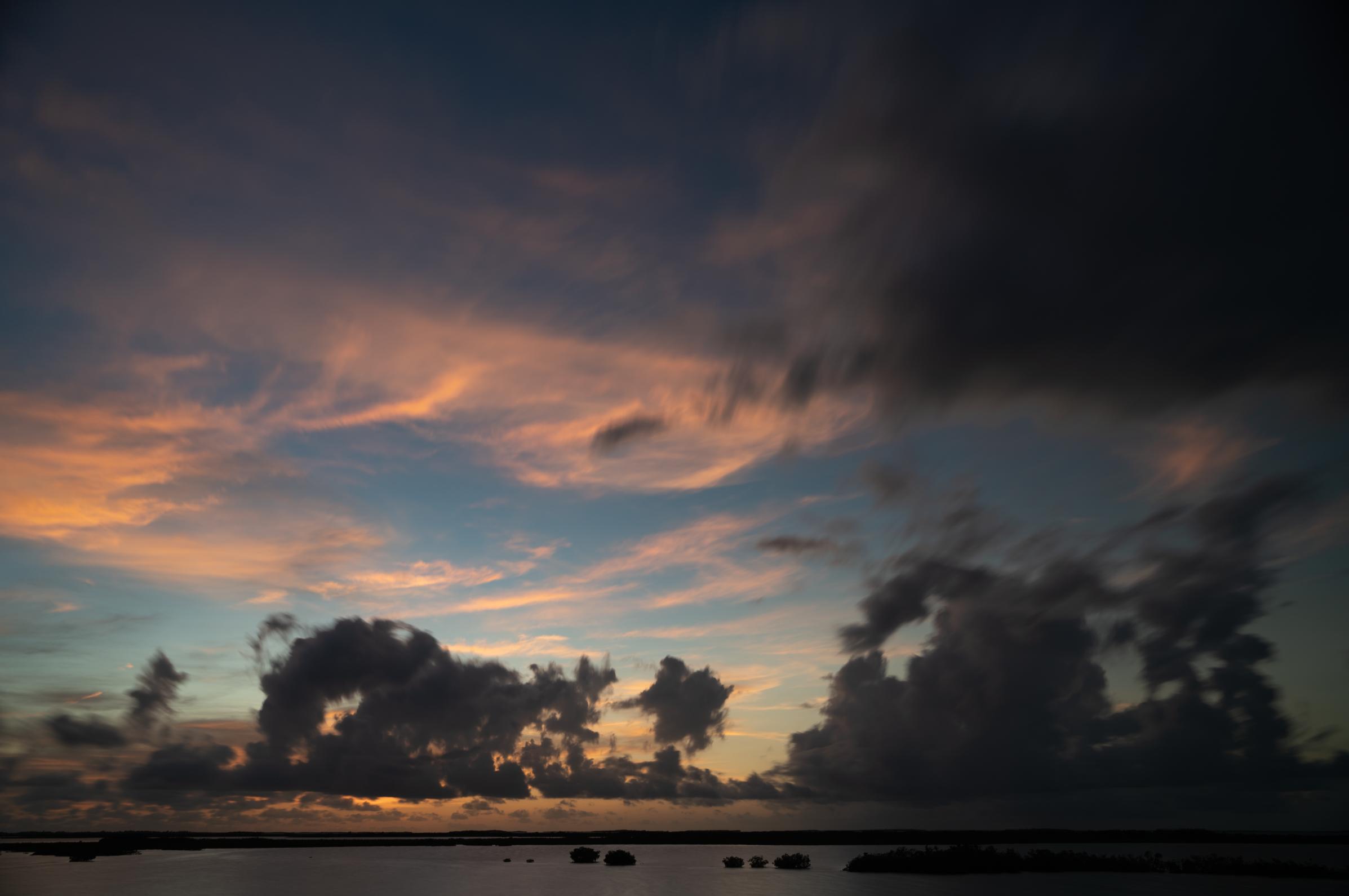 Straight out of camera, the image is kinda dull. It shows soft pastels, and colors that seem to blend together, as if watercolor. Not a bad trait to have in an image, but definitely not what I was wanting to show here - which was a stark change between the cotton-candy clouds, and the azure of the sky.

After a few tweaks, I've got something closer to what I want, in Camera RAW - even before I get into Photoshop. 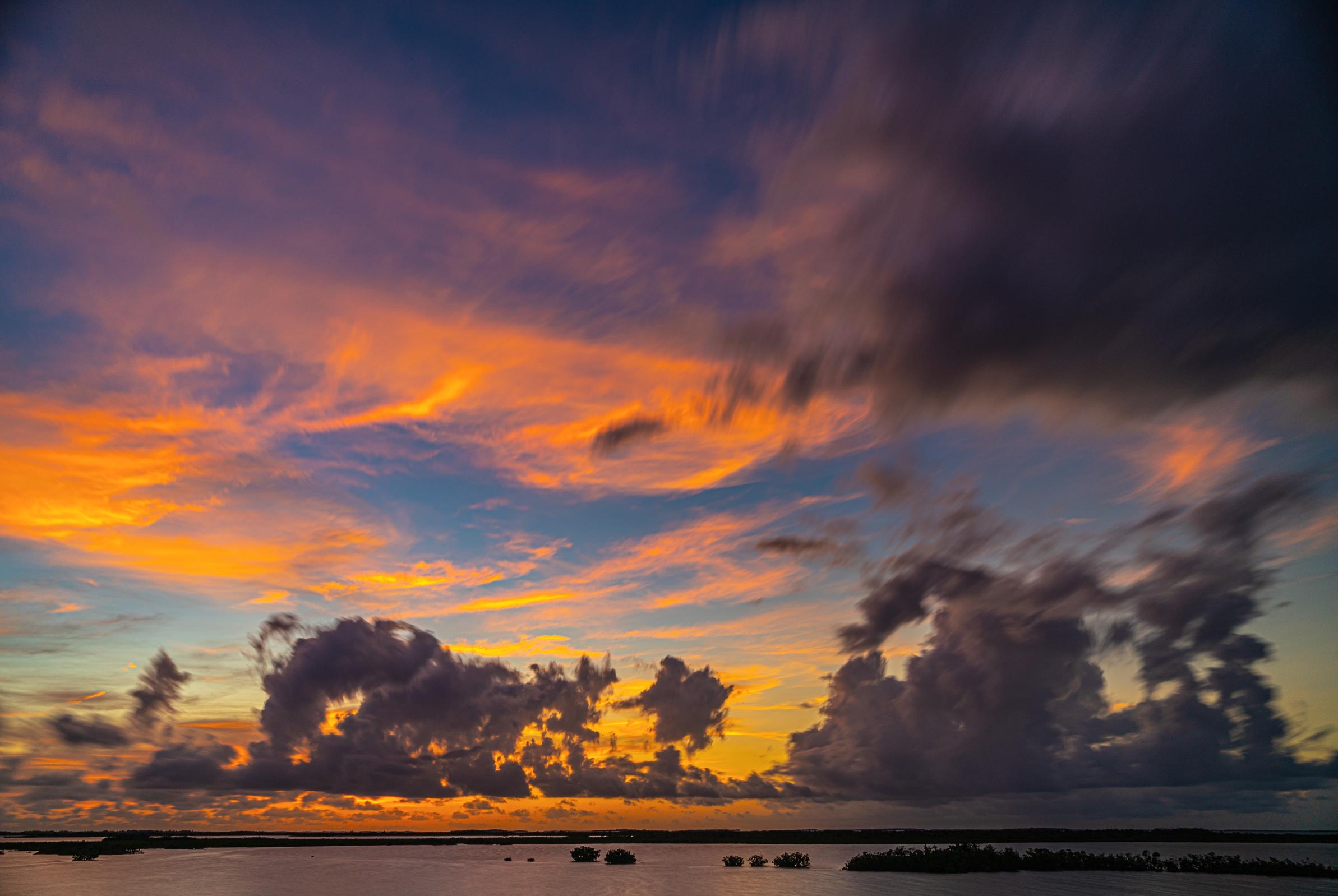 ﻿Like in the previous segment, let's look at what a traditional black and white filter does to a sunset. Keep in mind, we're looking at the average luminosity of each of the color channels - this is how the computer processes it. 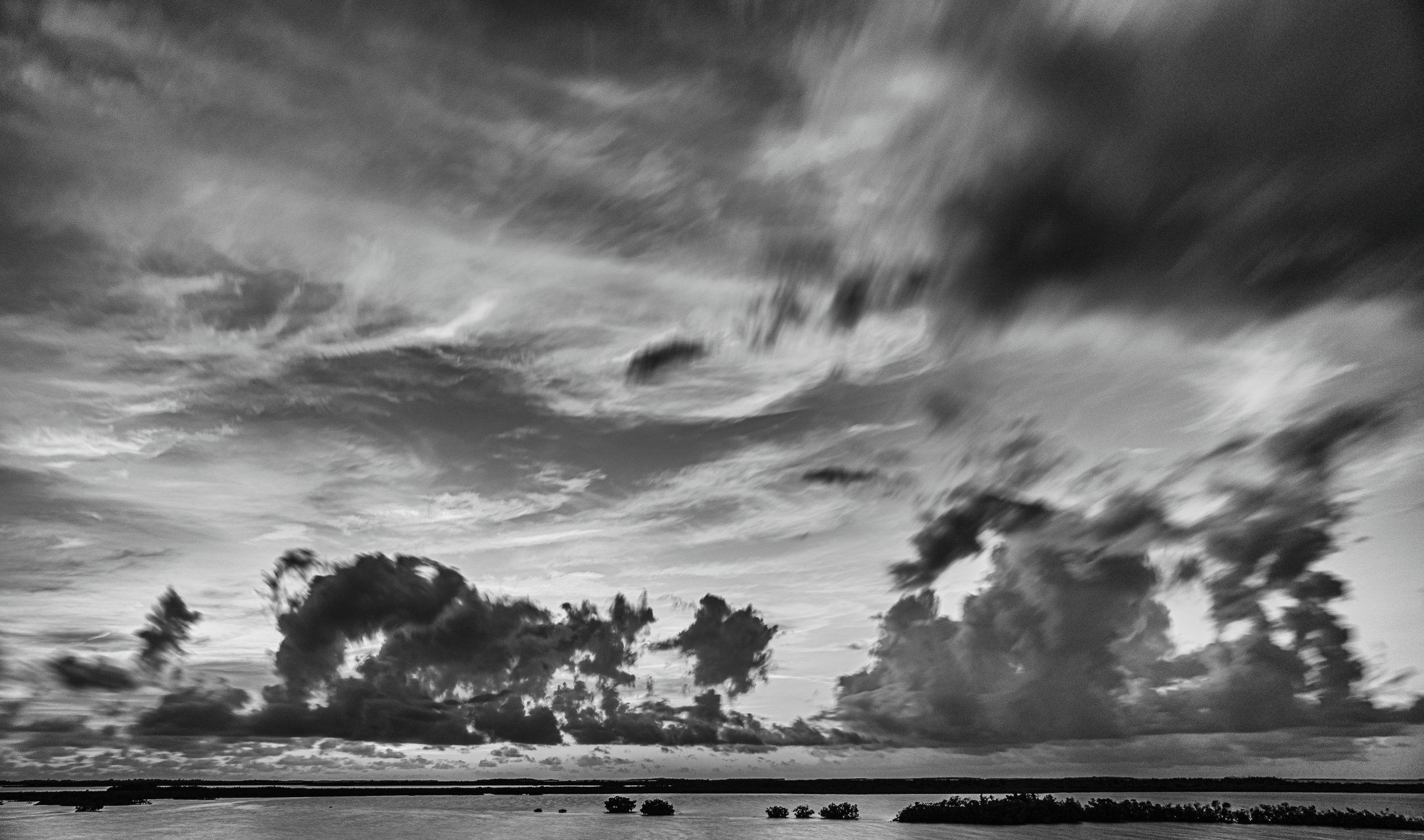 Grey channel - A classic take, but without a whole lot of life to it. Seems flat, especially on the right hand side.

﻿﻿Then, let's look at what the other channels have to offer. 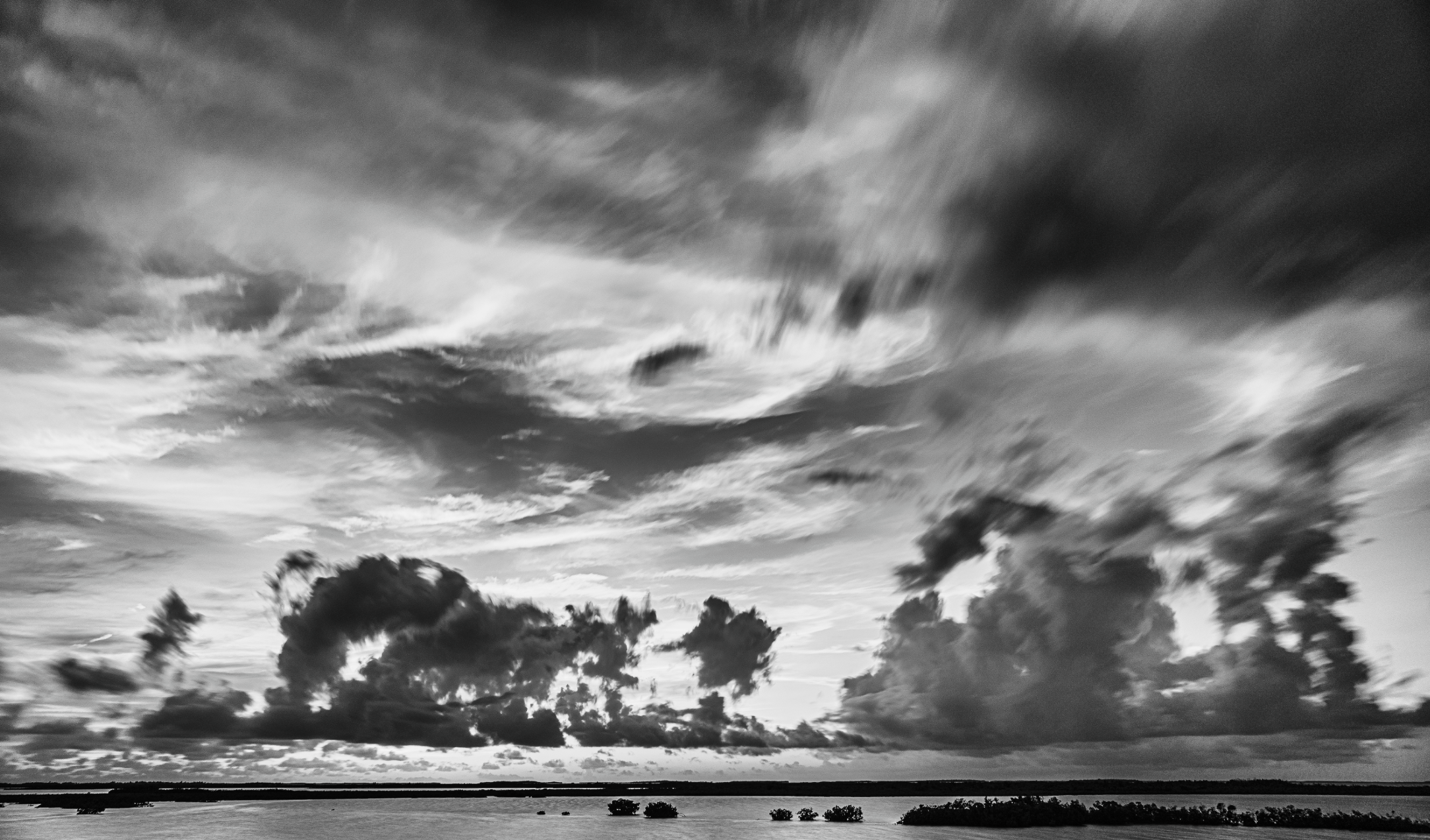 Red Channel - Not a whole lot of detail in the closer / lower clouds, which contain a fair bit of color (other than red), that's why they look dark. The bright sky behind is almost entirely made up of shades of red, so that's why it appears to get close to blowing out. 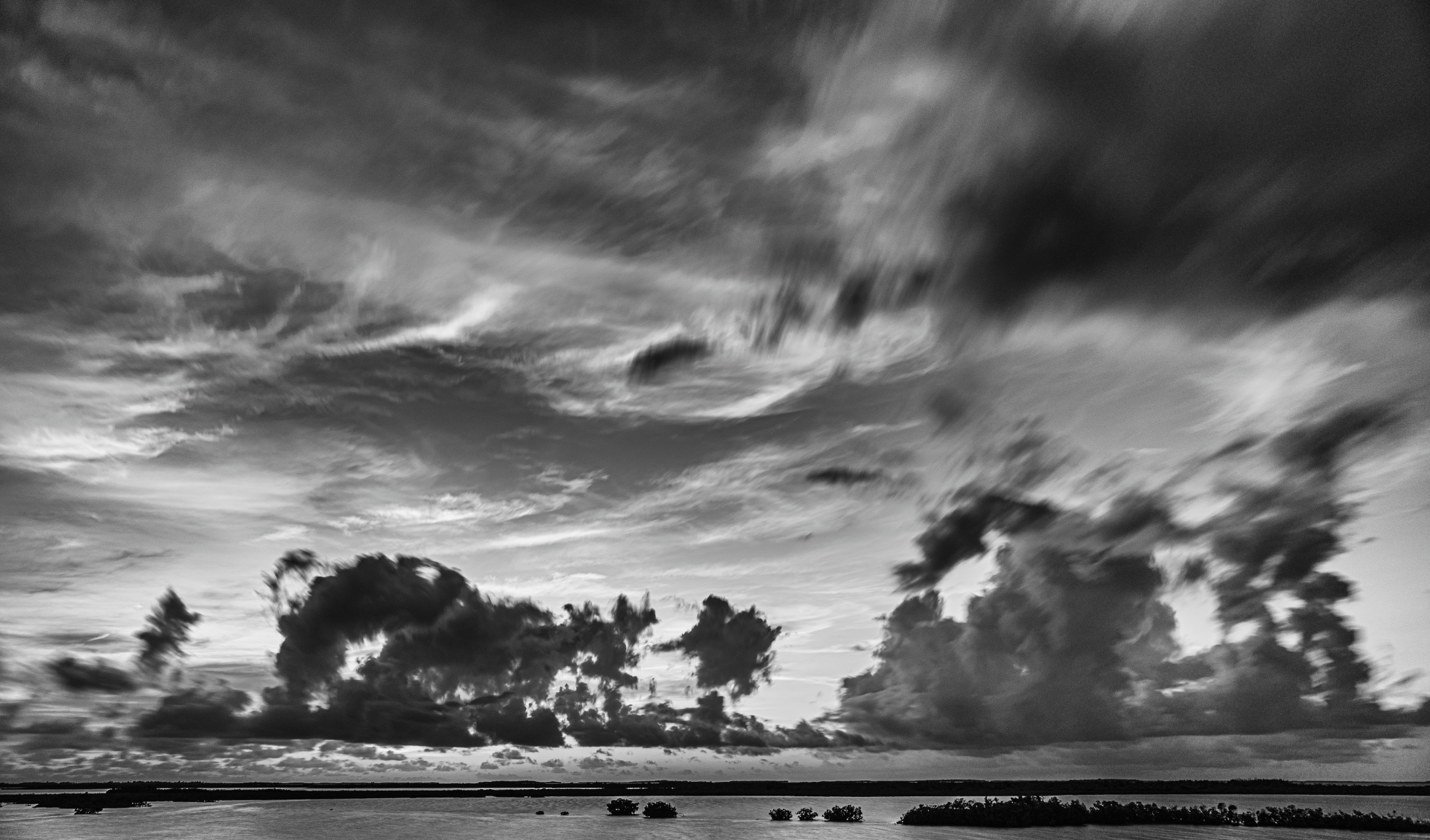 Green Channel - A nice blend of contrast, and detail. Shadows are recovered, and highlights not overexposed. 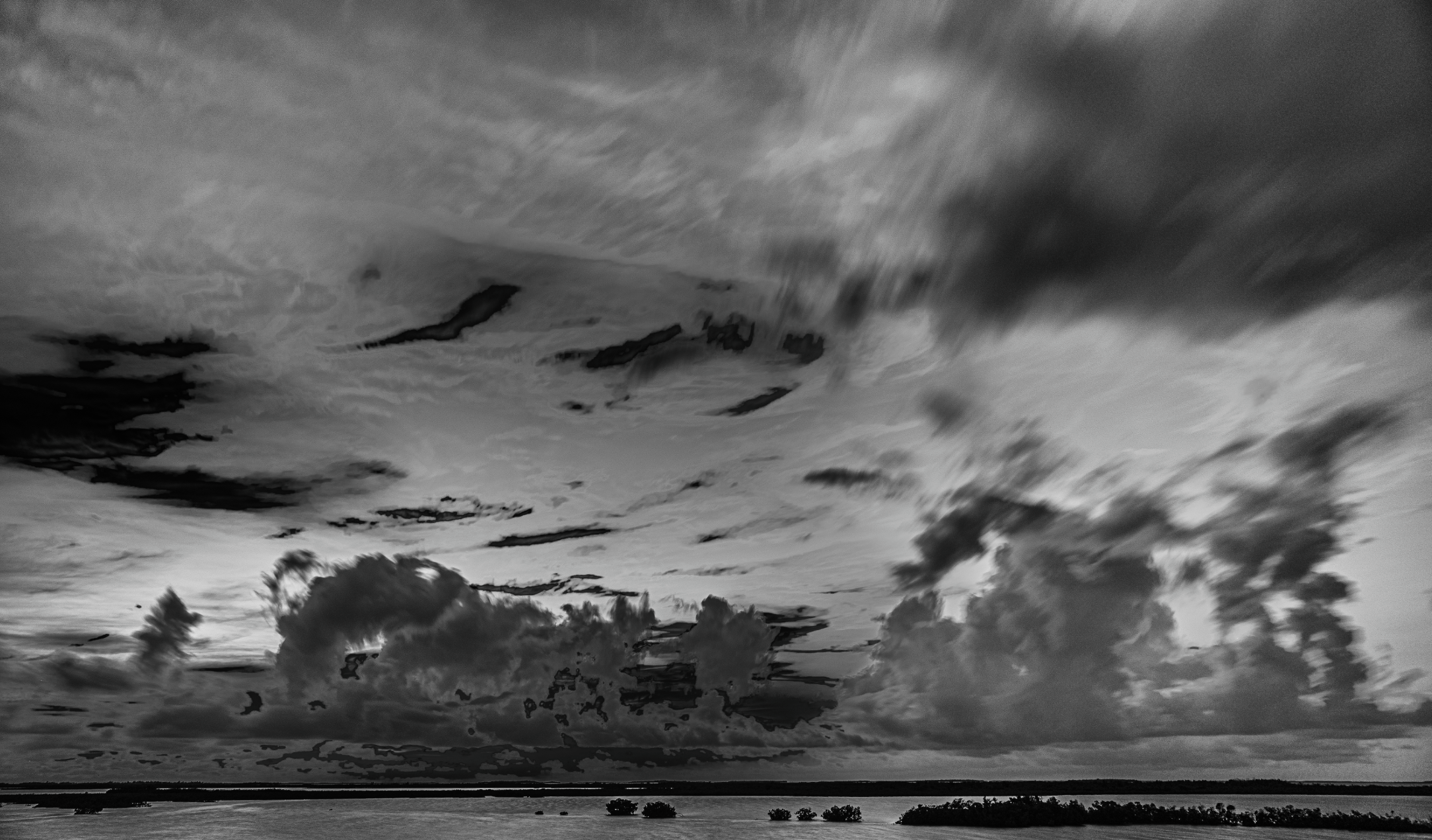 Blue Channel - Wait a second, this looks like garbage! Note where the sun is setting, and reference the color image(s) above - see that there's far less blue in that area of the image, and that's why the sun in the image directly above is much more dark)

For this particular composition, I settled on the green channel. A healthy blend of contrast being brought in both the shadows, as well as the highlights - without pushing it too far out of whack. Remember, we're not simply adding contrast to an image - we're adding acute tonal contrast (this is a term I just made up, so I have no idea if it offers any real world validity).

Like the last study, we play around with brightness, contrast, structure, and plenty of gradient filters of various strength. 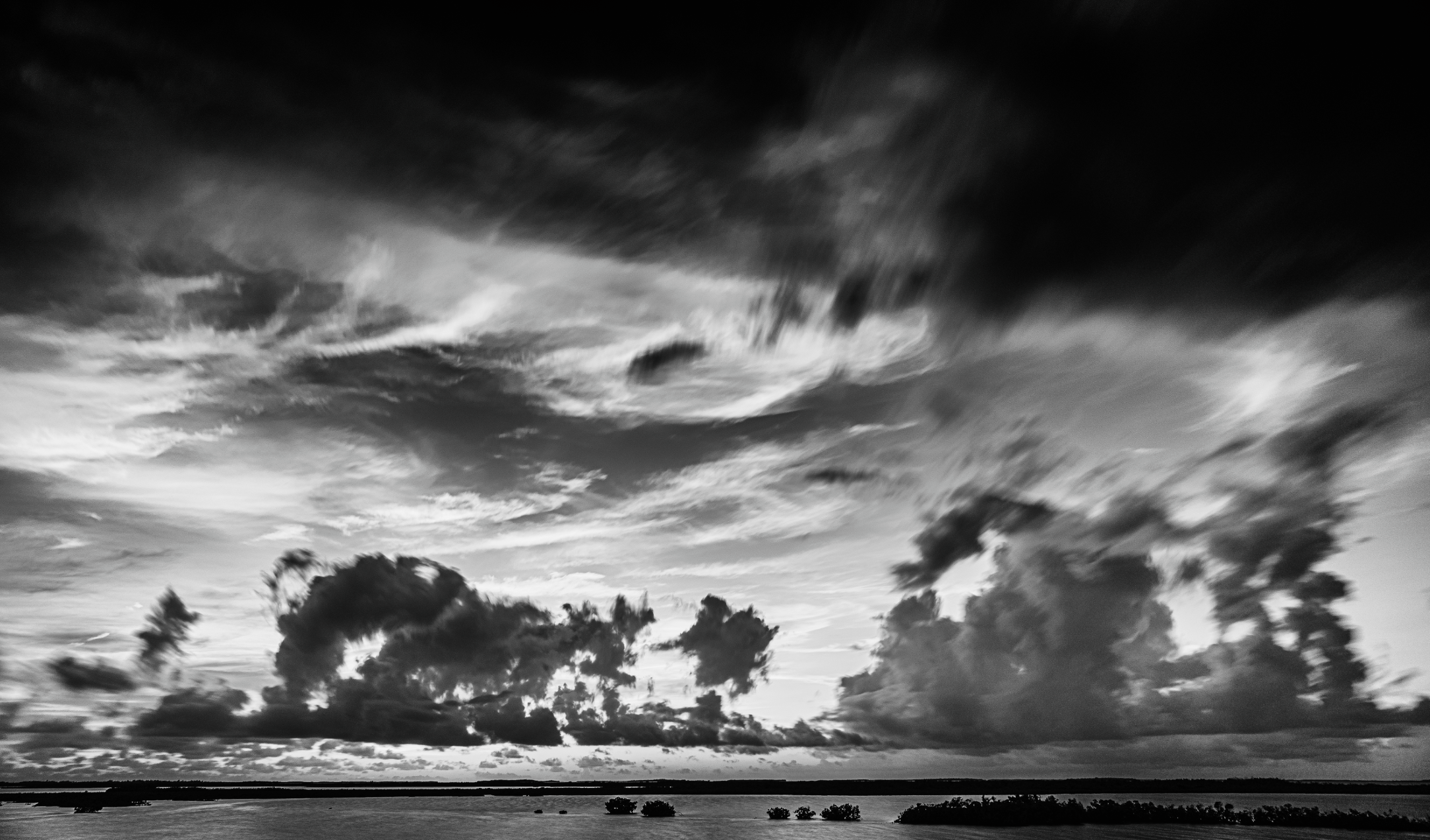 Now comes the fun part. This is when we bring the color back into the image. Look back at the step after we really brought the color into it - some of the tones look washed out, and you lose contrast, because you're trying to pump color into the image.

This is the stage where that all comes back together. Set the blend mode of the newly created B/W layer to 'luminosity.'
You are now rewriting the lightness / brightness values of all the colors in the image, to use the same brightness values as the black and white layer, yet you are keeping all of that color goodness that you liked in step two. Voila! 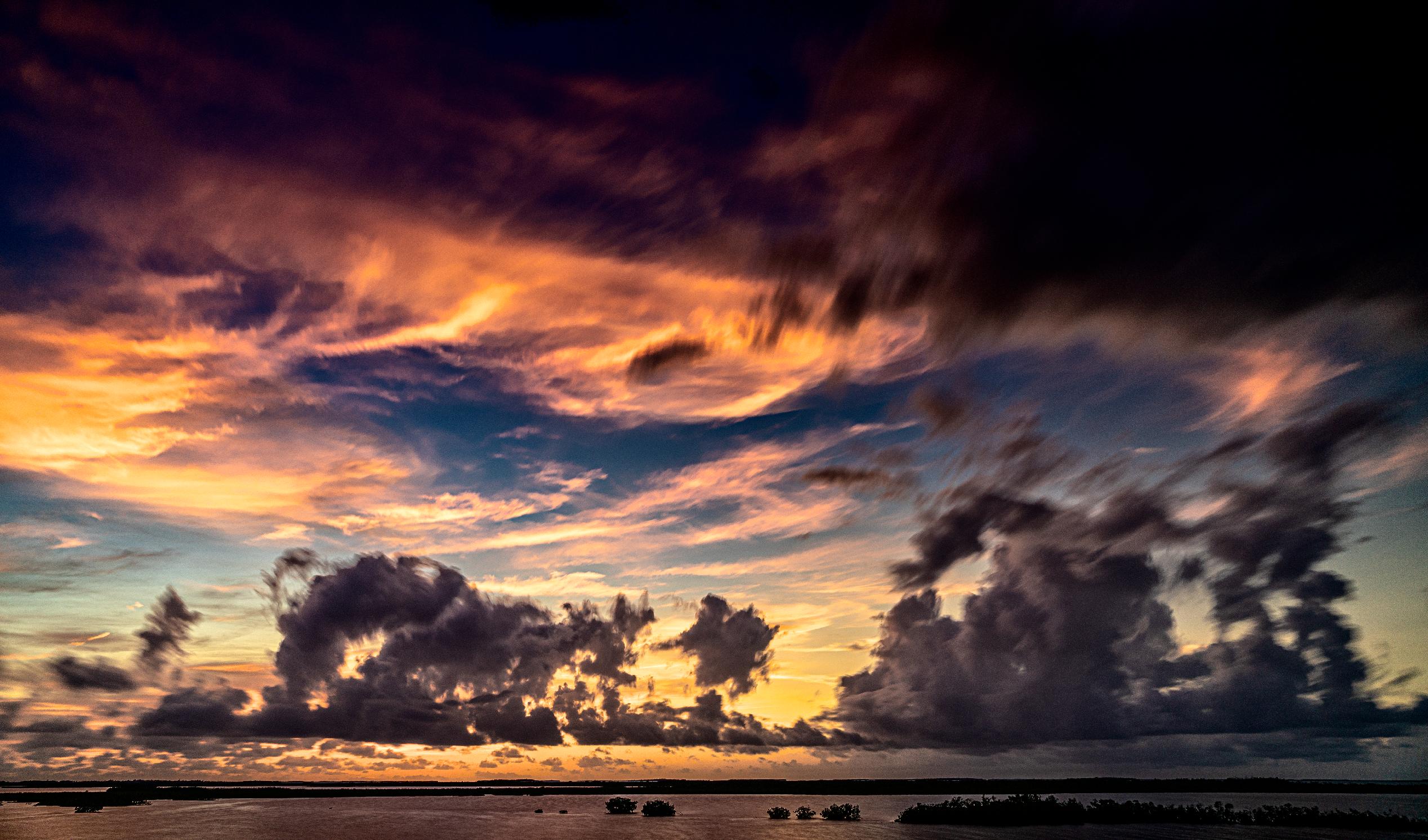 Questions? Shoot me a line!